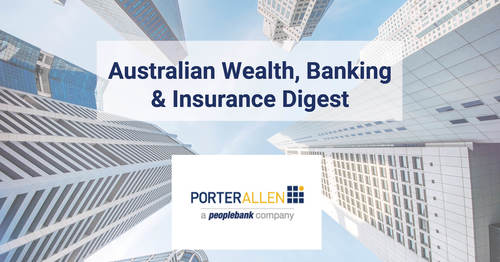 Suncorp has reported an increase in underlying profit for its life insurance business of more than 50 percent for the past six months but has flagged that it may still sell the business.

The legislation to create a single external dispute resolution body for financial services, the Australian Financial Complaints Authority (AFCA), has passed through Federal Parliament, with the new organisation slated to start accepting complaints from 1 November 2018.  In addition, AFCA has announced an increase in the cap for disputes for Brokers from AUD174,000 to AUD250,000

ANZ will be the first bank-owned retail superannuation fund to adopt the Voluntary Insurance in Super Code of Practice, which aims to make automatic insurance appropriate, affordable and not to erode retirement income

Following a strategic review, IAG is considering divestment of its Asian operations

Simon Agar has left his role as COO of Ebix to launch a new Consulting business named Risk IT, which will provide advice on IT within the Financial Services industry

Colin Fagen and Blair Nicholls have launched a new Underwriting Agency, Blue Zebra, aimed at bringing personal lines back to brokers.  The pair move from QBE, with the new agency being underwritten by Zurich

Craig’s Table, a new social enterprise backed by iCare, has opened its doors to injured workers in Girraween NSW

Crawford & Company is set to launch its new Workers’ Compensation offering in Australia, to be delivered through its TPA Broadspire

ASIC has accepted an enforceable undertaking from David Orth, director of Queensland-based Real Wealth and responsible manager of the Professional Representatives AFSL

Russell Investments is rolling out a new environmental, social and governance scoring system that aims to identify factors that could materially affect a company's financial performance

L1 Capital has appointed a syndicate of broking firms as it prepares to float its Long Short Fund listed investment company.  NAB will lead the IPO, while Crestone, Morgans, Morgan Stanley, Ord Minnett, Taylor Collison and Wilsons will serve as co-lead managers alongside the bank.

LGIAsuper has renewed its custody agreement with J.P. Morgan for 3 years based on a trusted partnership, particularly as it transitions to a public offer super fund

In response to ongoing scrutiny into the internal governance standards of Australia's asset management industry, the Financial Services Council has commenced its Principles of Internal Governance and Asset Stewardship regime

OneVue has added AllianceBernstein and Franklin Templeton to its Superannuation platform

Commonwealth Bank has launched a new “Chatbot”, that will help customers complete more than 200 banking tasks

Stephen Alcorn has left his role as Head of Institutional Business at J.P. Morgan Asset Management.  As a result the institutional and retail teams are set to consolidate ahead of a review

Michael Voskresensky has joined Copia as CFO from Mutual Trust, where he spent 12 years

Vivienne Toll has been appointed Director of NIBA.  Toll currently works as Head of Workplace Risk at Gallagher

Neil Morgan has been named Group Executive Technology at IAG.  Morgan joins from PwC, from whom he had spent a 12-month secondment with the Insurer

James Baum has been appointed CEO of Aon in Australia.  Baum is currently Managing Director Commercial and Chairman of Aon Broking Pacific and replaces Lambros Lambrou who is set to take a broader role with the business

Rebecca Engel has been appointed General Manager Underwriting Agencies at QBE.  In addition, Dean Cullen has been named General Manager, Specialty, with the Insurer.  Finally, QBE has launched a new team named People Risk, to be headed up by Adam Farr as General Manager while Financial Institutions and Direct Consumer business units have combined as Consumer, Affinity and Banking Partnerships under GM Eleanor Debelle

Kerr Neilson is set to step down as CEO of Platinum Asset Management.  Neilson will be replaced by Andrew Clifford

Phineas Glover has been appointed Head of Equity Research at Credit Suisse.  Glover joins from Macquarie

Whitbread Insurance Brokers has announced the appointment of Michael Giansiracusa as CEO. Giansiracusa has been with the business since 2002.  In addition, former CEO of PSC Insurance Group Gary Seymour, has been appointed Chairman

Angus Benbow has been named CEO of Centrepoint Alliance

Lorelle Hillman has been appointed GM of QLD at AIG

Elayne Grace has been named CEO of the Actuaries Institute, to replace David Bell

Rod Bristow has been appointed CEO of Macrovue, the AMP backed Fintech.  Bristow joins from Infocus

David Frost has been named Head of Strategy and Project Delivery at TelstraSuper.  Frost joins from Guild Retirement Fund

Swinton has closed 40 branches, with 260 jobs said to be at risk

Softbank, the Japanese tech-to-financial conglomerate, is considering taking a USD10 billion stake in Swiss Re

Patrick O’Sullivan has been appointed Chairman of Saga

Rupert Burgoyne Limited, the High Net Worth brokerage, has been acquired by Seventeen Group